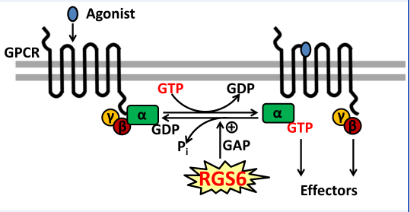 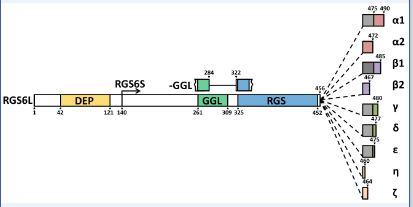 Predicted protein structure of human RGS6 proteins. There are predicted to be numerous RGS6 protein isoforms that differ in length due to the following: inclusion or exclusion of the disheveled EGL-10, pleckstrin homology (DEP) domain at their N-terminus, inclusion or exclusion of a complete G gamma subunit-like (GGL) domain, and the inclusion of one of seven distinct C-termini. RGS6 proteins with either the long or the short N-terminus are labeled as RGS6L or RGS6S, respectively. The C-terminal domains are labeled as α, β, γ, δ, ε, η, and ζ. The α and β C-termini exist in two forms, either with (α1 and β1) or without (α2 and β2); an 18 amino acid sequence encoded by exon 18 (grey square) of the RGS6 gene. Finally, proteins that lack the GGL domain are designated as −GGL proteins. Amino acid numbers are included to specify where key regions of the protein begin and end. Image adapted from Chatterjee et al, J. Biol. Chem. 2003. 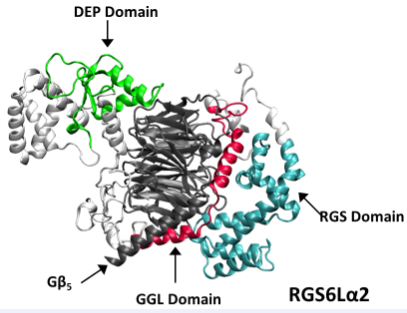 Structural model of RGS6La2 in complex with Gb5 based upon the known structure of the RGS9-Gb5 complex (PDB ID: 2PBI). Model was generated by Dr. Koland (Univ. of Iowa). 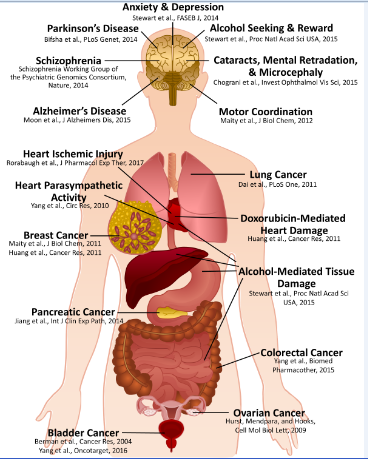