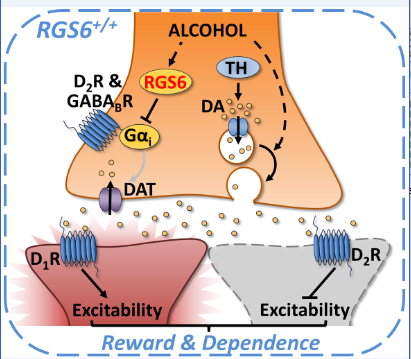 Role of RGS6 in the mesolimbic circuit in alcohol use disorders (AUDs):

Alcohol is the most widely abused drug worldwide and the neurobiological mechanisms underlying alcohol seeking, reward and dependence are not fully understood. This project is based on our finding that RGS6 plays a critical role in promoting these behaviors in mice as well as a subsequent GWAS identifying RGS6 as a novel AUD gene in humans. 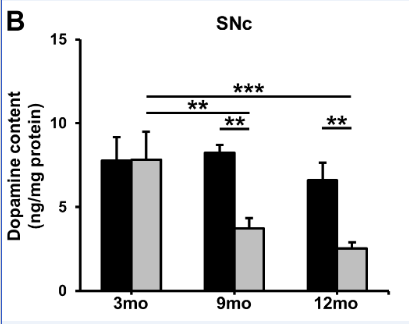 Role of RGS6 in the nigrostriatal circuit in Parkinson’s disease:

This project is based on our recent discovery that RGS6 is lost from the SNc of humans with Parkinson’s and that RGS6-/-mice develop age-dependent nigral dopaminergic neurodegeneration that recapitulates key hallmarks of the human disease.

Fig. 2. RGS6 loss is associated with a significant age-dependent reduction in SNc DA levels in mice.

Chronic alcohol use is associated with a form of non-ischemic dilated cardiomyopathy known as alcoholic cardiomyopathy (ACM). This project is based on our finding that RGS6 is an essential mediator of reactive oxygen species (ROS)-dependent ACM, including cardiomyocyte apoptosis, fibrosis and hypertrophy.

Fig. 3. Mice lacking RGS6 are protected against EtOH-induced cardiac damage. Mice were fed on a Lieber deCarli control or 5%EtOH containing diets for 2mos. Hearts were isolated from control and EtOH-treated mice. (A) heart weights (B) H&E staining.